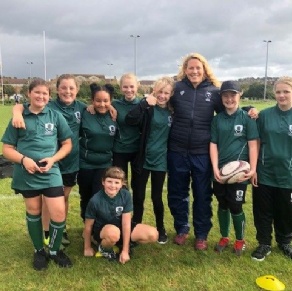 The year 7 girls played Touch Rugby as part of a Bristol Bears Rugby Festival. There were 9 teams from across Bristol taking part. Blaise lost their first game 2-1, when the girls were just finding their feet against strong opponents. We won our second match 2-1 with tries from Poppy and Angel. This put us through to the Silver medal competition. At the half way point the girls got the chance to meet the England Women's Rugby Captain and world cup winner Amber Reed.During the final matches the girls played very well and had really grown in skill and confidence. They beat Merchants Academy 2-1 and drew their final match ending the tournament 5th overall.